It was in 1967 that my elder brother Phil and I became interested in taking up gliding as a hobby.   At that time we both worked in one of Scotland’s New Towns, CUMBERNAULD, where my brother was an Architect and I was an Estate Surveyor.   A new airfield with a grass strip had recently been constructed as a facility for the New Town and the Glasgow and District Gliding Club had recently moved out from Glasgow airport which was becoming even more busy, to re-locate their Club at Cumbernauld.   Having recently watched the film “The Battle of Britain” and with my brother having served in the Royal Air Force during National Service and I was active as a Territorial Army Officer, we were most enthusiastic about learning to fly and therefore offered ourselves to the new Gliding Club for membership which I am pleased to say was thankfully accepted by them.   So commenced our love affair with Gliding as a Hobby. 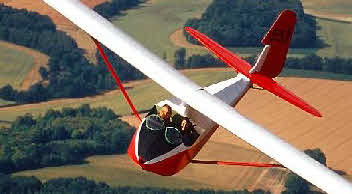 I was the first of their Cumbernauld pupils to be initiated into the art of gliding.   It was a cold blustery day when I was strapped into the twin open cockpit of the Slingsby T21 glider which was similar to the pictures shown here on the left and above.   The T21 glider was one of the most popular training gliders available at that time and most clubs had one.

The wind was from the West and since the airfield was in an East/West configuration, take off into the wind that day was from the East.   A winch was used to power the take off with a long wire cable which ran the whole length of the runway and was attached to the underside front of the glider.   There was a quick cable release pull mounted in the cockpit which, when activated at the top of the launch, released the cable from the glider and  which then floated to the ground on a small parachute.   So I sat there in the cockpit with the instructor as commands were relayed to the winch driver to ‘take up slack’  and when he did, and the cable became taught, the further command ‘all out’ was given and the glider lunged forward, gathered speed and was off the ground in about 20/30 metres.   I was exhilarated and marvelled as the glider steeply ascended to about 100 metres above the ground when there was a sudden crack and splinters from the floor of the glider came up to meet me.  The nose immediately went down and I could see myself and the instructor heading for the ground at quite a speed.   But immediately, the instructor appeared to get control and the glider then started to make a gentle descent towards the runway and within seconds, though it appeared to be an eternity, landed comfortable ‘straight ahead’.   What had happened, of course, was that the cable had severed when the glider was  at a height of about 300/400 feet and the cable release ring had flicked back and hit the underside of the glider this causing the wood splintering.  But the Instructor had immediately carried what I was to later learn as normal procedures, by releasing the severed part of the cable and putting the nose down to prevent a stall and, at that height of a cable break, land the glider straight ahead.   Had the cable broken at a higher height, the instructor would have had time to do a mini circuit and land back on the runway.   I see from my log book that this first flight took place on 10 March 1967.

One normally achieved a height of at least 1000 feet on each launch and each flight either on a left handed or right handed circuit of the airfield lasted only 3 to 4 minutes.   If there were thermals about it would sometimes last longer.   There was no feeling like the quietness and exhilaration of releasing the cable at the top of the launch, levelling off before turning to start your circuit.   Then it was continual concentration and hard work to turn, fly straight and level, watching your speed before making the downwind leg and lining up with the runway to prepare for the landing.   So at 3 minutes a time, and having to practice in addition stalls, spins and other flying skills, it was a slow process especially if you only managed to get two or three flights on each Sunday when the flights were operating.   It took me about 80 such flights until I was sufficiently proficient to go solo.   My brother was much quicker than me and went solo in half the time it took me.

But the day soon arrived (5 October 1969) when my instructors felt I was ready.   You were required to complete three flights - one left hand circuit and two right hand circuits in the Club’s only other single seater, a Slingsby Prefect.   I must say that it was a bit nerve wracking having to fly solo for the first time in another aircraft which I had never flown before.   All went well and I therefore achieved my Certificate A & B which was issued on 5 October 1969 by the British Gliding Association under delegation from the Royal Aero Club.

The above three photographs are of a Slingsby Prefect Glider similar to the one in which I took my first solo flight.   It handled in much the same way as the Slignsby T21 except that the Prefect had air breaks which were deployed to assist the landing whereas the T21 only had spoilers on the wings.

Without doubt the T21 and the Prefect were a  joy to fly but did have limitations, especially if you were having an  aerotow.    Gliding was a great hobby but became very time consuming since you had to spend a disproportionate amount of time getting the other members of the group airborne during flying days.   My work necessitated that I return to the Dumfries and Galloway Area in 1970 and with three children now growing up and requiring my full attention, I decided to call it a day and concentrate more on my Golf which, according to my wife, was ‘much safer’!

It was, however,  a great and relatively cheap way of learning to fly and I would encourage anyone interested in flying to contact your local Gliding Club and get a test flight to experience the wonders of gliding.   You will soon get hooked and it will probably encourage  you  to carry on and achieve your Private Pilots License especially as nowadays, they now have many powered gliders running on VW engines.   I got part of the way there!!